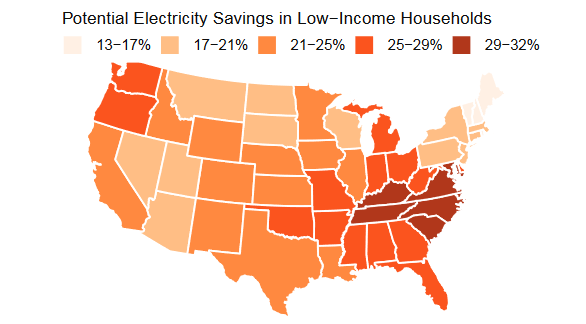 By Dan Power, Research and Analysis Intern, Alliance to Save Energy

Efficient appliances and lighting coupled with tight building envelopes can reduce energy usage in a home, leading to lower utility costs as well as health benefits for the occupants, making it one of the most effective resources for lowering energy burdens in low-income households. Unfortunately, the low-income households who would most benefit from these resources are often the same households who have the most difficulty accessing them. To address this problem, we need to know more about these communities and where efforts would best be targeted.

Low-income can be defined several ways, but typically, it is based on earning a certain percentage of the federal poverty level, state median income, or local area median income. By one definition, 44% of all U.S. households, or roughly 50 million households, can be characterized as low-income. Despite that fact, in 2018, only 10% of utility spending on energy efficiency went to low-income communities.

While electricity prices in a region are one factor in energy burdens, other factors like climate, median household income, and housing type play a role. For example, southeastern states like Georgia, Alabama, Mississippi, Arkansas, and South Carolina have some of the lowest average electricity prices in the country but among the highest low-income energy burdens. Low-income households in those states are estimated to use roughly 36% more electricity than the average low-income household in the U.S. largely due to increased air conditioning demand from the warm climate. Southeastern states are also estimated to have the lowest median incomes in the nation, another potential reason for higher energy burdens.

The type of appliances used is also an important factor. According to data from the most recent Residential Energy Consumption Survey administered by the Energy Information Administration in 2015, higher efficiency equipment like central air conditioning, central warm air furnaces, and heat pumps are more common at higher income levels. Conversely, more energy intensive and less efficient equipment, like portable electric heaters and individual air conditioning units, are more common in lower income households. While conventional wisdom might be that low-income households also have older equipment than wealthier households, the data shows us otherwise: equipment type varies much more across income levels than the age of equipment, which displayed relatively little difference.

Energy efficiency improvements like upgrading HVAC equipment, water heaters, and lighting, along with improving building envelopes can lead to significant energy savings. In southern low-income households, these upgrades could reduce electricity usage by 25% to 31%. Nationwide, in single-family detached households earning less than 80% of the local area median income, those improvements could result in about 93.5 TWh of electricity savings each year leading to $16.7 billion in customer energy bill savings annually. This would be the same as reducing CO2 emissions by 66 million metric tons each year or removing close to 14 million cars from the road. To put that in another context, those estimates were calculated in 2018 when residential electricity sales in the U.S. totaled nearly 1,470 TWh, meaning energy efficiency upgrades in low-income single-family detached homes alone could reduce residential energy demand by approximately 6%. Expanding these upgrades to low-income single-family attached homes and multifamily buildings would only increase the savings potential.

Well-designed low-income energy efficiency programs have enormous energy and cost savings potential, particularly when designed in such a way that they target the customers who need these savings the most. Easing energy burdens for low-income households through efficiency upgrades improves not only household financial well-being, but overall quality of life through more comfortable and sustainable spaces, and as we look at the energy transition taking place, we need to ensure all communities are a part of the solution.