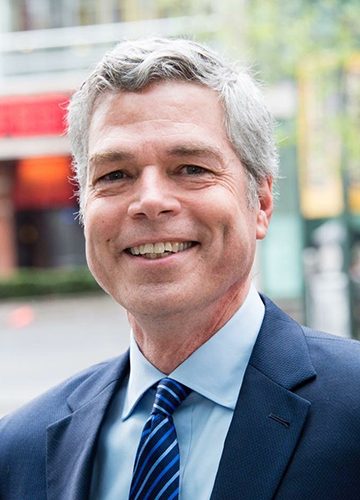 Tom was elected to the White Plains Common Council in 2001.  During his time on the Council he focused on constituent service, sound fiscal management, and the environment.  Clean air restrictions on construction sites, which he spearheaded, remain part of the approval process in White Plains and have served as a model for other communities.

In February of 2011, while serving as Council President, Tom became Acting Mayor.  He was elected Mayor in 2013 and 2017, winning re-election with well over 70% of the vote.

Tom has spearheaded important environmental and sustainability initiatives including banning the use of the dirtiest heating oils, creating the first dedicated bike lanes in the county, and establishing a network of electric vehicle charging stations in municipally owned parking structures.  Under his leadership, the project to finally cap the city’s landfill, which closed more than 30 years ago, was completed.  Also under Mayor Roach, the city has streamlined the solar permitting process and has replaced all of its street lights with LEDs while also making energy efficient upgrades at city buildings and facilities. Tom initiated textile recycling at the City’s Gedney Yard.  This initiative has diverted over 50 tons of textiles from the waste stream since its inception in 2014.  In 2021, the City broke ground on a 9 project, 6.8 MW community solar portfolio of city-owned sites that will triple the amount of solar energy produced in Westchester County.  When completed it will produce enough energy to power 700 homes annually.

Tom’s long term vision for the city is to continually enhance the downtown environment for businesses and residents while at the same time maintaining the strong, vibrant residential neighborhoods that have long characterized White Plains.

Mayor Roach has prioritized growing the number of affordable housing units in the city to ensure that White Plains remains a city that people of all income levels can call home.

Tom enjoys spending time with his family, reading, skiing, and running.  He has a personal best in the NY Marathon of 2:47:47.

In 2008, Tom was diagnosed with stage 3 cancer of the nasal pharynx and concluded treatment in 2009.  He is currently cancer free and did not miss a single regular Council Meeting during his illness.