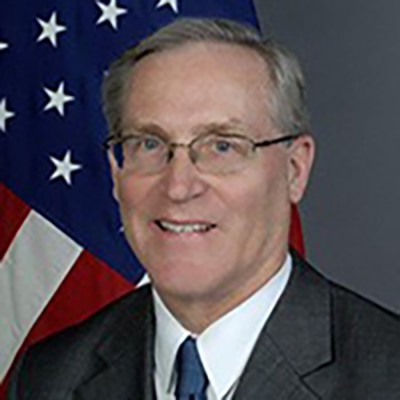 Dr. Robert F. Ichord, Jr. is a senior fellow at the Atlantic Council’s Global Energy Center where he focuses on power sector transformation, energy efficiency and clean energy technologies, and climate change and national security. He is currently serving as the rapporteur for the Atlantic Council’s high-level Task Force on US Nuclear Leadership. He has a distinguished forty-year US government career, serving with DOE, USAID and the Department of State in advance U.S. international energy policy and programs, including energy efficiency and electricity reform initiatives in Eastern Europe and the former Soviet Union. He created innovative, cost-sharing private public partnerships linking US utilities, regulators, and industrial companies with counterparts in Europe. He retired in 2016 from the US Department of State, where he served as deputy assistant secretary for energy transformation in the Energy Resources Bureau.

Dr. Ichord is a graduate of Denison University (BA), The Fletcher School of Law and Diplomacy (MALD), and the University of Hawaii (PhD). He is a recipient of numerous honors and awards, including the Johnson Controls/US Energy Association “International Energy Efficiency Award”, the Alliance to Save Energy “Lifetime Achievement Award” and the “The Secretary’s Career Achievement Award” from Secretary Kerry upon his retirement from the State Department. He is author of numerous articles, Atlantic Council reports and blogs, and a book on Indonesia’s energy policy.