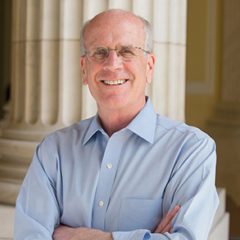 Representative Peter Welch has been a champion for working Vermonters throughout his career. Since his election to Congress in 2006, he has been widely recognized as a thoughtful and effective legislator who chooses governing over gridlock.

In 2006, Peter was elected to Vermont’s only seat in the U.S. House of Representatives. His campaign gained nationwide attention for being the only contested congressional race in the country where both candidates refused to air negative ads.

In Congress, Peter is a leading advocate for energy efficiency. He is a senior member of the powerful House Energy and Commerce Committee, and serves on the Energy Subcommittee of that panel. He also chairs the High Performance Building Caucus in the House, is a member of the Sustainable Energy and Environment Coalition and is a proud honorary board member of the Alliance to Save Energy.

Peter’s record reflects his strong commitment to bringing people together to find common sense solutions to the difficult challenges facing our state and nation. In an era of partisanship, he has worked across the aisle to create jobs, increase access to affordable education and health care, invest in energy efficiency, protect our environment, and care for our veterans.